CONGRESS WEB PAGE is SPONSORED BY

In Anatolia apiculture is based on a nine thousand years old history. The first law of the world on apiculture is known as the Hittite Tabloids, which were written four thousand years ago. Anatolia still conserves its appropriate position for apiculture. Due to Turkey’s climate, rich botanical diversity and status as a transitional region between the European and Asian continents, it has one of the highest potentials in the world for apiculture. 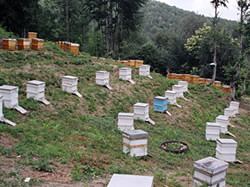 With 150.000 families engaged in beekeeping and 6.8 million bee colonies, Turkey is at the second place in apiculture in the world. The sole organization representing bees and beekeepers in Turkey is the Turkish Association of Beekeepers (TAB). TAB includes 80 provincial unions, one serving each province and in total TAB has 58,000 members in Turkey. All beekeepers in Turkey are registered with the ARS (Apiculture Recording System), a joint program between TAB and the Turkish Ministry of Agriculture, and can be observed via a monitoring system. Beekeepers in Turkey work with modern techniques and equipment.

75% of our total colonies, which is 4.9 million colonies, are used in itinerant beekeeping activity, and change location an average of three times per year for a total of 2.000 km of bee transport. In this way, they Travel all Turkey throughout the season, following various routes.

Turkey is a home to 10.000 native plant species, nearly 3.900 of which are endemic. The most important feature which makes Turkey botanically interesting is that Turkey contains three different phytogeographic zones (European-Siberian, Mediterranean, and Iranian-Turanian), and serves as a bridge between Europe and Asia. Nearly 500 plants in our country are known to provide nectar or pollen, and nearly 50 of them are identified as dominant nectar plants. Chestnut honey, thyme honey, mountain meadow honey, citrus honey, rhododendron honey and mixed flower honey are some of the most famous honey types in Turkey. 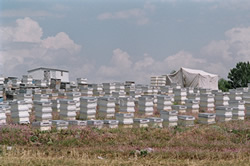 In addition, with the pine honey obtained from the dense pine forests covering Mugla province and its environs, Turkey holds the single largest share of the world’s pine honey production. At the same time, with the greatest genetic diversity in honeybees, Turkey is the world’s largest gene center. This wealth consists of the various ecotypes of Apis mellifera such as those associated with Anatolia, the Caucasus, the Black Sea, Mugla and Thrace. The Caucasian strain in particular, which has drawn a worldwideattention with its productivity and docility, has been taken under protection as a pure strain in specific regions of our country and introduction or removal of bees to and from these regions is strictly prohibited.

2022 © Apimondia. All rights reserved
Organized By